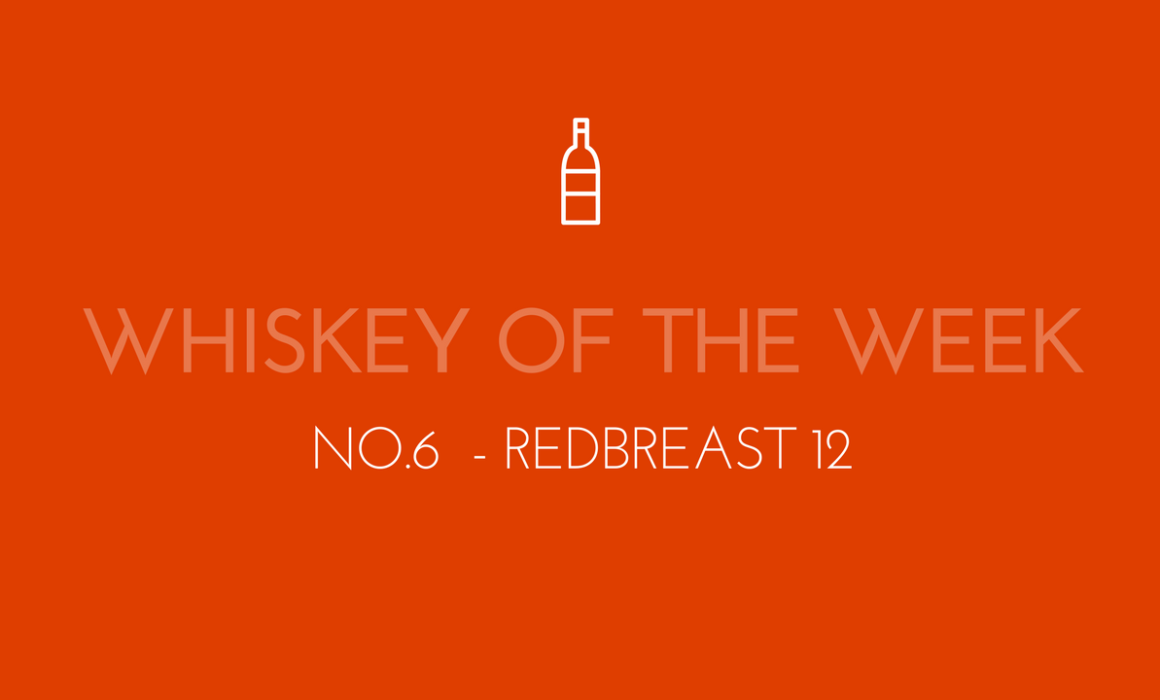 Our  Whiskey of the week this week is Redbreast 12 year old – No.5 on our premium tour and another beautiful drop of liquid gold.

Watch our whiskey expert Eoin get to grips with this rare drop. A 100% heavy pot still with a high sherry ageing percentage. Two sherry casks were used for each bourbon cask. One of our favourites on our tours.

History of Redbreast Whiskey – from irishwhiskey.com

Redbreast has existed since 1903, when the Jameson Whiskey distillery, located in Dublin’s Bow Street, began supplying new make whiskey in bulk to the Irish branch of Gilbey’s wine & spirits merchants. Gilbey’s, being an importer of various types of wines, already had a ready supply of good quality casks, which would be sent to the Bow St. distillery to be filled and returned for maturation in Gilbey’s warehouses.

According to Irish Whiskey folklore, the managing director of Gilbey’s was a keen ornithologist and named three of the company’s Irish whiskeys after birds: Chaffinch, Yellowhammer and Redbreast. However, the Redbreast brand suffered when the Irish whiskey category fell on hard times in the early half of the 20th century and about forty years ago the contract to supply Gilbey’s was terminated with the closure of the Bow St Dublin distillery in 1971. Gilbey’s continued to bottle their aged stocks of Redbreast, but the whiskey wasn’t great and by the mid-1980s the Redbreast brand had faded and in danger of disappearing completely.

Thankfully, in 1991 the Redbreast brand was revived by Midleton Whiskey and, along with stable mate Green Spot, Redbreast 12 year old kept the endangered pot still Irish whiskey category alive. For this, Irish Distillers, and in particular the recently-retired Midleton Whiskey Master Distiller Barry Crockett, deserve great credit. Under new ownership after the Pernod Ricard takeover, Midleton Whiskey has been at the forefront of the wonderfully revitalised Irish whiskey scene in recent years.

The popularity of Redbreast Whiskey reached a turning point some years ago with its appearance on the shelves of some upmarket UK supermarkets, with the brand’s signature judiciously-sherried style winning over an ever-growing army of fans. New releases have followed, with the 15 year old, originally a one-off special for a French whiskey retailer, being added to the permanent range in 2010 and the impressive 12 year old cask strength launched at the end of 2011 to global whiskey praise.

Nose     // Aromas of crème caramel, toffee and dried fruits with some touches of spice and coffee.
Palate  // Rich and oily on the palate with flavours of dried fruits, roasted nuts and exotic spices.
Finish  // Long,spicy and warm.